It was not even a pit bull that attacked the lady, it was a boxer and now all pit bulls must die for it. This is such bull, the world has gone nuts, lets ban everything for our safety. Dogo Argentinos are included in the ban and they will die right along with all the pit bulls even though they do not have one common ancestor and were breed to not be aggressive. There are bad apples in every bunch but they are burning down the whole orchard over this. In life you can never be ...completely safe and I'm sick of the politicians banning things for our safety. The same politicians who could care less and turn a blind eye to, poison in our food, mercury in our vaccines, GMOs that are wiping out our bees, and a million other things that are killing us. Sorry but I find it hard to believe they care at all what happens to any of us and this is just another form of control!

Nearly three months after a brutal dog attack that claimed the life of a Montreal woman, the city has passed its contentious pit bull ban.

City council voted Tuesday in favor of changes to its animal control bylaw that include a ban on new ownership of pit bull and pit bull-type dogs. The final vote was 37-23 in favour of the ban.
"My duty as mayor of Montreal is making sure I am working for all Montrealers," said Denis Coderre. "And I am there to make sure they feel safe and that they are safe."
The bylaw vote was supposed to take place Monday, but was pushed to Tuesday due to a busy agenda.
The city announced that the new rules, including the ban on new ownership of pit bull or pit bull-type dogs, will go into effect across all 19 Montreal boroughs starting Oct. 3.
Members of Opposition Projet Montréal questioned whether the Coderre administration would be able to enforce the new rules.
"This is going to create a bigger problem than a solution," said Coun. Sterling Downey.
Attack leads to action
Supporters argue the new regulations give priority to human safety over dog safety and that pit bull bans in other jurisdictions decreased the number of severe dog bites.
"A Montreal woman died because someone didn't have control of their dog," said Anie Samson, the city executive committee member in charge of the animal file.
The city had originally intended to update its legislation concerning dangerous dogs by 2018, but plans were accelerated following the mauling death of 55-year-old Christiane Vadnais.
​The dog that attacked her was initially identified as a pit bull, but police now say they are still waiting for DNA test results.
Court challenge planned
The announcement has led a Montreal-based coalition, composed of lawyers and experts in animal behaviour opposed to the ban, to say it will move forward with its plan to launch a court challenge.
"I think it would be a shame if people allowed Montreal to get away with this," lawyer Julius Grey told CBC Montreal's Homerun.
"This is very serious. It's not an object, it's not the right to seize a car — it's a right to take a member of your family and that should not permitted."
Animal rights advocates were also quick to pan the bylaw, pointing out that many cities that have implemented similar legislation have since repealed it.
"We are extremely disappointed with the council's decision to adopt archaic bylaws that are proven to be ineffective," Ewa Demianowicz, campaign manager for Humane Society International/Canada, said in a statement.
Demianowicz said the new law would kill "innocent dogs without any improvement in public safety."
The Montreal SPCA said in a statement it was "disappointed, but not surprised."
"If the city of Montreal truly wanted to ensure public safety, it would not have forced a rushed adoption of controversial legislation which is unfair, unenforceable, and, most importantly, ineffective," the animal protection agency said.
The bylaw comes as the Quebec government prepares to introduce legislation of its own. Public Safety Minister Martin Coiteux said the province wouldn't interfere with municipalities that choose to impose stricter rules.
"What's important is that we come up with common standards for the area that make sense, that will actually ensure safety for all. If some towns want to go farther, then I don't see why the Quebec government should stop them," Coiteux said.
What's a pit bull?
The new bylaw will apply to all 19 boroughs and will define pit bulls as:
- Staffordshire bull terriers.
- American pit bull terriers.
- American Staffordshire terriers.
- Any mix with these breeds.
- Any dog that presents characteristics of one of those breeds.
Those who now own a dog of those breeds and already live in Montreal will have to acquire a special permit in order to keep their pet by Dec. 31, 2016.
The bylaw also creates two categories of dogs of all breeds: at-risk and dangerous. At-risk dogs are those that exhibit aggressive behaviour, such as biting someone. Dangerous dogs are those that have killed someone or are deemed dangerous by an expert.
"No matter what, if your dog is dangerous, we will be able to act accordingly," Coderre said.
An amendment to the bylaw made Tuesday morning aimed to address concerns that a pit bull would be automatically euthanized when its owner dies. The changes allow the pit bull's licence to be transferred to another person who was living at the same address, a direct family member or a spouse.
Posted by James Farnum at 11:16 PM No comments:

The Dogo Argentino is a large white muscular dog that was breed for big game hunting in Argentina. The Dogo was breed from the now extinct Cordoba Fighting Dog along with a wide variety of other dogs starting in 1928 by Antonio Nores Martinez who was eighteen and his young brother Agustin seventeen. Antonio wanted to produce a dog that would be a great hunter, exhibit a willingness to protect its human companions, have steadfast bravery and be great with children.
The brothers started off with 10 Cordoba females and brought in the first contributing males. They would breed them until they got the desired characteristics they were seeking and than add a new breed. At one point in the program they had over 30 breeding females to take care of and feed, their parents, friends and townsfolks all helped out, if not for their help there would have been no way that these two young men, who were still in school could have ever continued.  Antonio who became a surgeon wrote the first breed standard for the Dogo Argentino using his medical knowledge to refine and improve the breed. 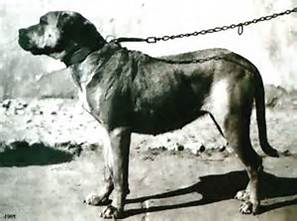 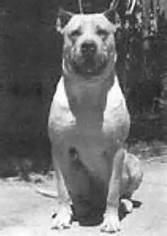 The dogs that where used to create the Dogo Argentino were: 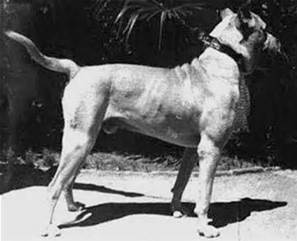 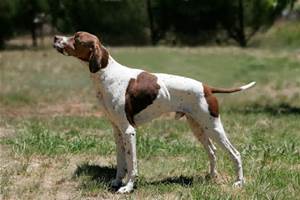 The Pointer for their keen sense of smell 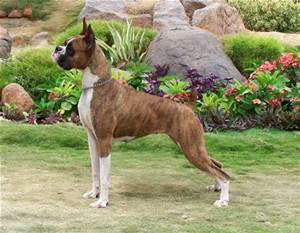 The Boxer for its energy, liveliness and gentleness 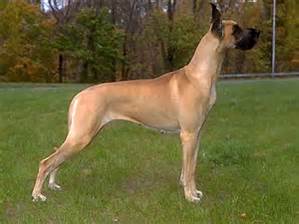 The Great Dane for its size 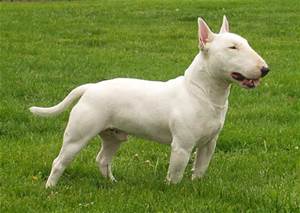 The Bull Terrier for their fearlessness 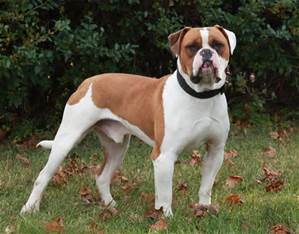 The Bulldog for its boldness and broad chest 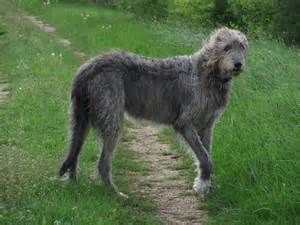 The Irish Wolfhound for its Hunting Instincts 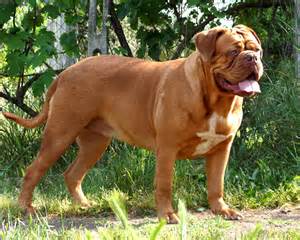 The Dogue de Bordeaux for its powerful jaws 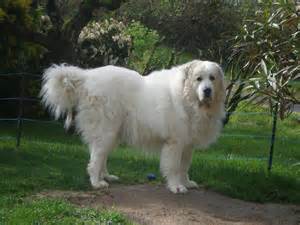 The Great Pyrenees for its white coat 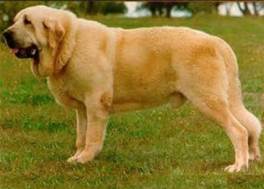 The Spanish Mastiff for its power

The Dogo Argentino is the realization of a dream that began over 85 years ago. The creation of this dog was a 50 year labor of love, that Antonio never got to fruition, he was murdered on a hunting trip by a man who wanted to rod him. At that point his brother Agustin took over full time on the project bringing it back from devastation after his brothers death and moving the headquarters for the breed from Cordoba to Esquel, in southern Argentina. Agustin the ambassador to Canada used his diplomatic ties to spread the Dogo worldwide. The Dogo Argentino is everything and more that Martinezs brothers set them out to be.

"I still remember as if it were yesterday... the day when my brother Antonio told me for the first time his idea of creating a new breed of dog for big game, for which he was going to take advantage of the extraordinary braveness of the Fighting Dog of Cordoba. Mixing them with other breeds which would give them height, a good sense of smell, speed, hunting instinct and, more than anything else deprive them of that fighting eagerness against other dogs, which made them useless for pack hunting. A mix that would turn them into sociable dogs, capable of living in freedom, in families and on estates, keeping the great courage of the primitive breed, but applied to a useful and noble end; sport hunting and vermin control." - Agustin Nores Martinez, History Of The Dogo Argentino​
The Dogo Argentino took over 50 years of the Martinez brothers lives to produce. Breeders need to take a close look at that kind of devotion and hold themselves to the same kind of standards when breeding these magnificent animals. The goal of all breeder should be to make the breed the best that it can be.
​
Many US breeders have forgot the true purpose of the breed and onlt breed dogs for marketability. We as breeders need to preserve the true nature of these dogs, so that the Martinez brothers dream will not be lost on vanity. Breeder should always remember this when breeding and strive for the creation of the perfect Dogo.
Posted by James Farnum at 5:48 AM No comments:

Dante has always loved tire swings, so today I put a couple of them in his run. Right away he started playing with them. I will have puppies in about 6 weeks and they will be ready for homes right around Christmas. Contact me to reserve your puppy today!
Posted by James Farnum at 8:45 PM No comments:

I Installed Some Tire Swings and Ropes for my Dogo Argentinos to play with!

I installed some tire swings and ropes for my Dogo Argentinos to play with! Dante has been having a blast for the past couple of days. I walk my Dogos and play with them everyday but they have so much energy I have to two find new ways that they can amuse themselves. All of the standard toys that I have tried get ripped up in a day or two and that is with buying the heavy duty ones. 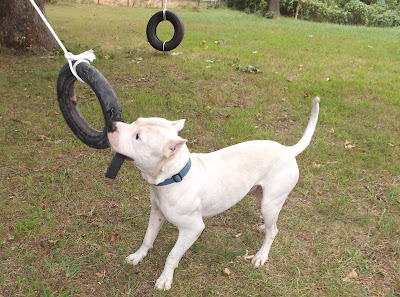 Dante playing with the small tire swing, that the dogs can also play tug of war with. 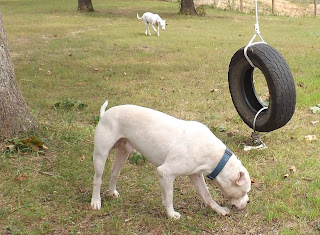 Dante my male Dogo Argentino, he is so much fun! 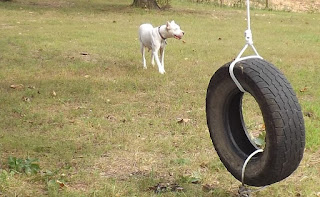 Faith my female Dogo Argentino coming over to check out the toys, Faith is really mellow so I don't think she is going to play with this stuff that much.


Posted by James Farnum at 8:42 PM No comments:

We will have Dogo Argentino Puppies in time for Christmas Reserve your New Family Member Today!

Posted by James Farnum at 2:13 PM No comments:

Posted by James Farnum at 8:49 AM No comments:

James Farnum
This is the on going Blog about the greatest dogs in the world, My wonderful Dogo Argentino's. Dante the Young male, Faith the older female and last but not least Rosie the baby.